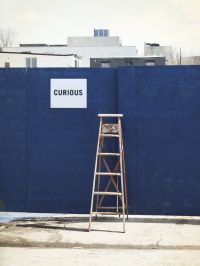 Curiosity isn’t always a good thing. It was curiosity that killed the cat, after all; and, if Curious George is any indication, it is very closely tied to mischief.

But think of someone whose mind you admire. What are the qualities or characteristics of this person’s mind? Chances are that curiosity is among them. Curiosity can, then, be an admirable intellectual trait. It can be an intellectual virtue.

Real learning begins and ends with curiosity. It is curiosity that causes us to ask questions, to wonder, to seek understanding. Just imagine what human civilization would be like if curiosity had never made an appearance—if people only sought the knowledge or understanding necessary for survival. There would no science, no technology, no art. There would be no real culture.

What, then, are our schools doing to facilitate curiosity in students? Suppose you were to pull aside your son or daughter’s teacher and ask: “What specific activities, assignments, or teaching strategies do you employ in an effort to inspire curiosity in your students?” What would you expect the reply to be?

You might think that teachers simply don’t have the time to teach for curiosity (or any other character traits). If they hope to keep their jobs, they need to focus on teaching academic standards and skills instead. But this is a false dichotomy. You don’t teach curiosity by teaching about curiosity. You teach it through an active and reflective engagement with academic content and skills. Educating for curiosity and other intellectual virtues is more a matter of “how” one teaches than it is about “what” one teaches.

To get a better idea of what curiosity looks in action, consider the following passage from the novel by British author C.P. Snow called The Search:

“When I was a child of about eleven, a new excitement suddenly flared up in my life …

This particular Sunday night was warm and twilit, and I fancy summer was nearly over. As we came to the end of the town, the sun had just gone down behind the river, and – I remember it as though it were yesterday – in the yellow sunset sky there was a sickle of new moon, and high over our heads a sprinkling of stars just coming dimly out. We stopped and looked.

‘I wonder if they’re what we think they are? Stars! Stars like this!’ He waved vaguely. ‘People think we know about them. I wonder if we do.’

I gazed up at him.

I didn’t know what he was thinking. All of a sudden I felt that all the things around me were toys to handle and control, that I had the power in a tiny, easy world.

‘I wonder if they are what we think they are,’ my father was saying again.

The night had taken hold of me. I wanted to do something with those stars. I did not quite know what, but I was elated. Their beauty stirred me, but it was not only that. If I had been older, I should have said I wanted to know, to understand, to alter. I wanted to rush out and have them for my own. I laughed:

The narrator is gripped by the stars. He wants to figure them out—to understand what they are and how they work. He is moved by the possibility of understanding.

Note as well that the narrator’s curiosity appears to be precipitated by his father’s own attitude toward the stars. This raises the question: what are we doing to inspire curiosity in our children? Do we give our children any reasons to think that curiosity is a good thing—an important educational value?

This can be done in at least two ways, both of which are illustrated by the father in the selection above. First, we can make a practice of modelingcuriosity to our children. The most obvious way to do this is by asking questions—by thinking and wondering aloud. But curiosity isn’t just about asking questions. It’s also about trying to find answers. Therefore, we also need to model this activity. The next time our child raises a question that we can’t answer and we reply by saying “We’ll have to look that up,” we need to make good on this suggestion (for those who smartphones, chances this can be done presently).

Second, to help inspire curiosity in our children, we also need to model a felt interest in or passion for understanding. Children notice when something excites us. And this means something to them. Therefore, we need to show them that we value curiosity, not just by asking questions and seeking answers, but also through our emotions and feelings.

How have you managed (whether deliberately or not) to inspire curiosity in your children or students? How have you seen others do the same?