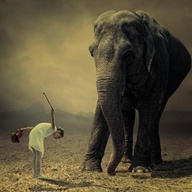 The very idea of humility tends to elicit mixed reactions. Some equate it with spinelessness, servility, diffidence, and other undesirable traits. They think, for instance, of Winnie the Pooh’s Eeyore, or of the famous Dickens character Uriah Heep, who says of “umbleness”:

“They taught us all a deal of umbleness – not much else that I know of, from morning to night. We was to be umble to this person, and umble to that; and to pull off our caps here, and to make bows there; and always to know our place, and abase ourselves before our betters.”

But this is a far cry from genuine humility.  Consider, by contrast, a person who is so comfortable in her own skin or has such a strong sense of self-worth that she can freely acknowledge her limits, struggles, and failures. She is not afraid of what other people think. She does not try to micro-manage their perceptions of her. Nor is she very concerned with status, pecking orders, or the like. She is free to be herself—so free that she can comfortably reveal her imperfections. This is real humility.

Intellectual humility involves an awareness of and a willingness to “own” one’s intellectual limits and imperfections.  An intellectually humble teacher isn’t afraid to acknowledge when he doesn’t know something or when he has a made an error. Similarly, an intellectually humble student is aware of the gaps in her knowledge and of the ways in which she tends to struggle intellectually. She does not attempt to ignore or cover up these limitations. On the contrary, she can freely admit them—especially when doing so may serve to facilitate her intellectual growth.

Intellectual humility is a radical but utterly essential virtue. It is radical because as parents and teachers we tend exclusively to value and praise strength and competence. While strength and competence are good, an overemphasis on them can leave our students and children (and ourselves!) feeling that any kind of intellectual weakness or deficit is something to be ashamed of and hidden from view. Intellectual humility is an essential virtue for the familiar and straightforward reason that personal growth is possible only when we can identify and “own” our limits and weaknesses. This is a necessary—if sometimes painful—starting point.

What, then, can we do as parents or teachers to encourage intellectual humility in the children whose lives we influence? For one thing, we can make our homes and classrooms spaces in which it is “safe” to admit our intellectual weaknesses and limitations. We can also help our children and students see these admissions—as well as the kinds of failures that sometimes result from them—as opportunities for growth, not as reflections on their self-worth. As suggested in a recent and widely listened to NPR story, this might involve the encouragement of intellectual struggle.

Discussing the issue I’m having with [trying to foster intellectual courage and intellectual humility] in my AP classes with you all earlier this month was extremely helpful, and I wanted to share a couple of the things I’ve tried that seem to have had some positive impact.  The Monday after our seminar, I drew a spectrum line on the back board of the classroom with “terrified of answering and being wrong” on the left and “totally confident answering whether I’m right or wrong.”  Per Jacquie’s suggestion, I gave each student a small post-it and as we conducted class (facing the front), each student went back one at a time and put their post-it on the spectrum.  After they’d all finished, I had them turn around and look–sure enough, most of the post-its were grouped on the left side of the spectrum.  Thinking back on it, I should have had them write a reflection on those results, but we just had a brief discussion about it together as a class.  We concluded that it’s not only important for me to reinforce risk-taking and wrong answers as a great way to learn, but that they needed to reinforce that with each other.  A number of them said it really helped to have that visual reminder that they’re not alone in feeling afraid of looking ‘dumb.’

Since then, I’ve made a conscious effort to praise students for taking a risk with an answer they weren’t sure about.  Yesterday, as we were discussing a poem, there were several times I challenged students’ answers and asked them to defend their interpretations.  When they couldn’t, the class was tasked with figuring out how they were off in their answer and what the text was pointing to instead.  I could tell these students were out of their comfort zone (I was too!), so at the end of the period, I asked the class, “how many of you learned something today because someone had a wrong interpretation?”  Nearly every student in class raised his/her hand, and I could see the visible relief/encouragement in the faces of the students who had given those answers.  I asked a couple of the students who raised their hands to share how it helped them and they said that it made them analyze the text more closely and also analyze their own thinking more carefully.

Kudos to this teacher and to all the other teachers and parents who are taking positive steps to nurture intellectual virtues in the children they serve and love!