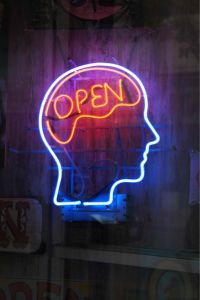 As human beings, we love to be right—right in how we act, but also in what we believe. In principle, there’s nothing wrong with this desire. However, the desire to be right often has such a strong grip on us that we have a very difficult time handling it when someone disagrees with us or criticizes something we believe or have said. Our kneejerk response is to be defensive or to attack the person who has challenged us. One illustration of this is our susceptibility to what psychologists call “confirmation bias,” a pervasive human phenomenon whereby we unconsciously seek out evidence that supports our beliefs and ignore or distort evidence that doesn’t.

Open-mindedness is a virtue that helps loosen the grip of our desire to be right. It frees us up to consider alternative views—even those that have been thrust upon us in a negative or critical spirit—in a way that is open, fair, and honest. It permits us to give opposing views or criticisms their due.

A powerful illustration of open-mindedness is the way that Abraham Lincoln responded to an antagonistic advisor and Cabinet member:

At the height of the American Civil War, President Abraham Lincoln was doing everything in his power to preserve the unity of his crumbling country. As both the nation’s elected president and as one of the most intelligent men of his generation, Lincoln had every right to expect deferential respect from his subordinates. And yet, as the war waged, he found himself being criticized and ridiculed by friends and foes alike. One man Lincoln was supposed to count as a friend was his secretary of war, Edwin Stanton. However, both publicly and privately Stanton had made no secret of his disrespect for Lincoln. Even though Lincoln was aware of Stanton’s insubordination, Lincoln kept his secretary of war, believing that Stanton’s sharp mind and independent perspective would be a valuable balance to his own.

At one of the war’s most critical points Lincoln sent a direct order to Stanton. Not only did Stanton refuse to carry it out, but he again publicly mocked Lincoln, calling him a fool. Instead of reacting out of anger or spite, Lincoln is said to have replied, “If Stanton said I was a . . . fool, than I must be one. For he is nearly always right, and generally says what he means. I will step over and see him.” Lincoln was no wimp. He had demonstrated many times over that he was more than willing to buck the opinions of others if he believed they were wrong. Still, as the story goes, the two men had a meeting in which Lincoln listened carefully to his subordinate, concluded that Stanton was right and withdrew his order. (Phil Dow, Virtuous Minds)

Lincoln was not afraid of being wrong. He refused to allow a desire to be right to get in the way of an even deeper desire to get to the fact of the matter. Just imagine a world in which politicians—and any of us with strong political beliefs—demonstrate such open-mindedness and intellectual humility!

Some worry that open-mindedness amounts to a kind of intellectual wishy-washiness—hence the familiar admonition: “Don’t be so open-minded that your brains fall out.” But this is mistaken. As an intellectual virtue, open-mindedness is rooted in a desire for truth and understanding. We listen openly and fairly to competing views because we recognize that we are not cognitively perfect and therefore have much to learn from others, including those who disagree with us. Stoic philosopher Marcus Aurelius put this point nicely (if bluntly) when he said: “If someone is able to show me that what I think or do is not right, I will happily change, for I seek the truth, by which no one was ever truly harmed. It is the person who continues in his self-deception and ignorance who is harmed.”

I suspect that most of us would like our children to have firm convictions—to be intellectually courageous—but also to be open-minded. Few of us, at any rate, are comfortable with them becoming closed-minded, narrow-minded, or dogmatic. How, then, can we help nurture open-mindedness in our children? One general strategy is to seize any opportunity to encourage them to think and wonder. This can foster a kind of intellectual nimbleness and suppleness that make open-minded thinking much more natural. Another strategy is to create frequent opportunities for them to “perspective switch” or take up alternative standpoints or perspectives. This might involve something as simple as reflecting with them about how different life must have been in different time periods (e.g. before there were computers and smartphones!). Or it might involve imagining what life must have been like for particular individuals living in different times or places (e.g. a black child in the South during the Civil Rights movement). Another useful strategy is helping them to come up with reasons for and against various beliefs. For instance, as my 8-year-old daughter and I took a walk the other day, she explained to me that they had been “debating” the practice of whaling in her second grade class. Together we tried to come up with the three best arguments for and against this practice. We then considered how someone “on the other side” might object to these arguments. By engaging in this kind of mental exercise, she was getting practice in being open-minded. She was also having some intellectual fun.

It’s worth reiterating that open-mindedness is not an end in itself. Rather, it is aimed at developing a richer, deeper, and more accurate view of the world. As G.K. Chesterton put it: “Merely having an open mind is nothing. The object of opening the mind, as of opening the mouth, is to shut it again on something solid.”