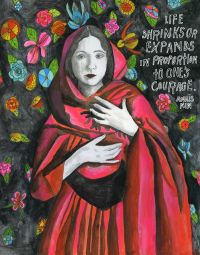 One memorable example of intellectual courage is Edward R. Murrow’s famous World War II news broadcasts. Murrow subjected himself to harrowing conditions (conducting live broadcasts from London rooftops with German bombs raining down around him) for the sake of reaching the truth. He felt that the American public had a “right to know” what was happening during the war and he was willing, for a time, to place this right above his own well-being.

If this is what intellectual courage looks like, what does it have to do with middle school education? In fact, intellectual courage wasn’t initially on IVA’s list of “master virtues.” However, as we reflected more on the obstacles to getting middle schoolers to engage learning in an active and positive way, its importance quickly became apparent. Middle schoolers are an inhibited and self-conscious bunch. They are quick to judge and criticize and slow to take risks. This mentality extends beyond lunch hour and passing periods into the classroom, where they tend to be reluctant to share their honest opinions, speak in front of the class, or admit that they actually like learning.  Tragically, they succumb to social fears and in doing so forfeit a great many intellectual opportunities and goods. This suggests that intellectual courage—far from being irrelevant to middle school education—is profoundly necessary.

How, then, can teachers foster intellectual courage? This is no small task. Here are a few steps in the right direction:

1. They can create a classroom culture in which students feel “safe” and accepted. Students need to know that if they say something wrong or “stupid,” they won’t be judged or ridiculed for it.

As parents attempting to nurture intellectual courage in our children, we can take many of the same steps. We can provide safe and supportive home environments for our children—environments in which they are not led to feel that their worth is measured by, say, their grades or other successes (or failures) in school. We can also give them regular opportunities to take intellectual risks, for example, by allowing them to take a class or participate in an activity that is outside their comfort zone, or by encouraging them to take a novel or creative approach to a class assignment or project. And we certainly can model intellectual humility ourselves and praise it when we see it in them.