How can history class support our understanding of diversity? 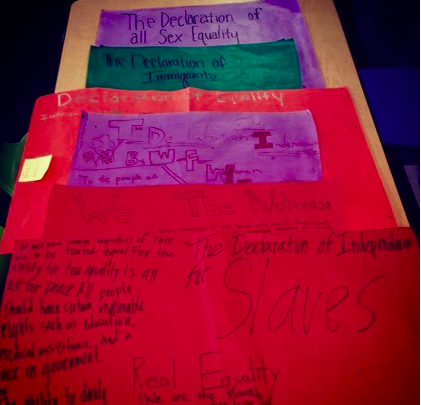 What do you remember about your middle school history textbook?

I don’t remember much of mine. Its lines of text were blurred with images of the past I could scarcely care to think twice about. And why should I have? Growing up in a calm, Pleasantville-like suburb of Orange County, I had very little reason to believe that I needed to retain information on ancient pyramids, medieval knights, or even memorize the finer details of our constitution’s preamble. The past was the past. All I needed was that “A”.

And I got the “A”, time and again, by playing the game.

I took multiple choice tests, reproduced facts, and performed skits with my classmates. I colored in maps of the world, studied battle strategies, and created dioramas of great architectural feats.

The textbook helped me do all this, but I don’t remember any of it. Not one line of text, not one image, not one question stands out to me. It took me a while to understand why this was.

As a college student (and currently as a teacher), I would often try to remember what those books looked like and felt like, but to no avail. The first history “textbook” that I clearly remember was not opened until my junior year of high school.

My first copy of Howard Zinn’s A People’s History of the United States was a hand-me-down. The pages were yellowing, the cover was bent at the edges, it had a brown stain on its back, and the spine was curved inward from use. I don’t only remember how it felt in my hands, but also how its words clearly and readily spoke to my ignorance. My slap-to-the-face introduction to a new narrative of the past started with the following passage:

“The treatment of heroes (Columbus) and their victims (the Arawaks)—the quiet acceptance of conquest and murder in the name of progress—is only one aspect of a certain approach to history, in which the past is told from the point of view of governments, conquerors, diplomats, leaders. It is as if they, like Columbus, deserve universal acceptance, as if they—the Founding Fathers, Jackson, Lincoln, Wilson, Roosevelt, Kennedy, the leading members of Congress, the famous Justices of the Supreme Court—represent the nation as a whole” (Zinn, 9).

I was shocked. Who could ever dislike Lincoln? Didn’t he free the slaves? And who were the Arawaks? How had I never heard of them before? Sure, I knew Columbus had found “Indians” when arriving to the New World, but never did I label them as victims.

I don’t remember my middle school history textbook because it did not challenge me. It instead reinforced a viewpoint of the world that I already had, one that was easy and familiar. Growing up I only learned one narrative, one story-line, one perspective of the past—mine. I was able to recognize my family’s journey in history, validate myself through political leaders that looked like me, and understand that whatever threatened my place in the world had already passed through the pages of an old history textbook ripe with territorial conquests, religious upheavals, and rioting. I was safe in my subconscious suburb, protected by a decade-long educational career of historical affirmation.

My experience in this setting is not unique, but neither is it universal. Entire populations throughout this country have had their voices taken from them in the form of this single narrative. Their appearance in history textbooks is often brief and overshadowed by the accomplishments of their seemingly more progressive and affluent neighbors. How can students who come from groups outside of this story-line expect to learn from a history they can’t see themselves having agency in? How can we as educators create a curriculum that empowers students of all ethnic and cultural backgrounds to understand that their past does not consist only of disenfranchisement, segregation, or genocide but of powerful and capable individuals who have shaped the course of our collective history?

In providing these diverse perspectives to students, we should not attempt to ignore or placate the atrocities committed against people of color in this country or world, but further understand and learn from them. Tecumseh’s words against Native American displacement, Frederick Douglass’ abolitionist writings, and Elizabeth Cady Stanton’s stance for women's rights are just a few examples of perspectives that students of all backgrounds need to be aware of. We must continually fight for the inclusion of these perspectives in the history classroom on a daily basis. In doing so, our inquiry will often turn to the question, “What voices get lost in history?”

Towards the beginning of the year, U.S. history students at IVA were asked to create a Declaration of Independence from the viewpoint of someone not included in the original phrase of, “We hold these truths to be self-evident, that all men are created equal, that they are endowed by their Creator with certain unalienable Rights…” Students then explored perspectives that were at times unfamiliar to them. What would this document look like if it was written from the viewpoint of a woman, an African American slave, a poor farmer, or a native American?

Teaching in this way leads to a breaking of the one-story, predominately white narrative that has dominated textbooks for so long. It creates a space for Black history, Latino history, Asian history, indigenous history, women’s history, LGBTQ history, and others to also occupy our historical inquiry everyday. These different perspectives provide new viewpoints and add to the richness of our diverse community. Celebrating these groups only on one day, week, or month out of the year is not enough. They must be studied everyday, in every lesson, and be present in all reflections of our past. Students should be empowered to know that these groups have been important participants in every aspect of our history and have a rightful place in our future, just like them.

I encourage you to be uncomfortable, to be unsatisfied. What perspective of the world did you not seek out today? Which did you gravitate towards? Did you look to validate your historical place in society or did you challenge it some way by accepting a narrative of the past different from what you were already familiar with? Diversity is not just a variety of skin colors. It is a wide and profound array of opinions, cultures, and histories. Seek out this diversity and make it a part of your daily life. I’ll end with the following:

“I wonder why some people think it is alright for adults to hear such a radical, critical point of view, but not teenagers or sub-teenagers? Do they think that young people are not able to deal with such matters? It seems to me it is wrong to treat young readers as if they are not mature enough to look at their nation's policies honestly. Yes, it’s a matter of being honest. Just as we must, as individuals, be honest about our own failures in order to correct them…” -Howard Zinn, A Young People’s History of the United States