Just a Few Minutes of Courage (A Letter to My Students) 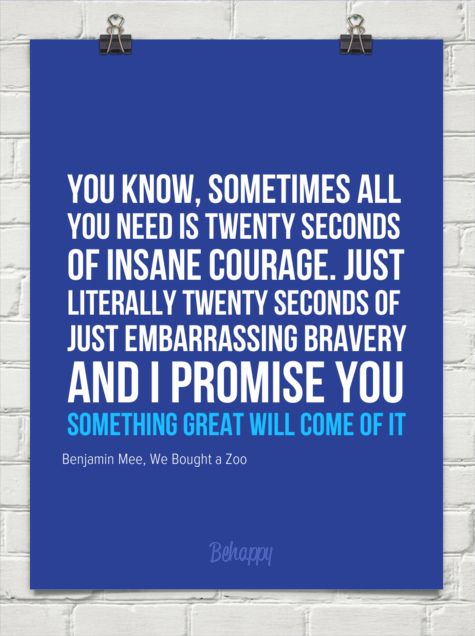 "Introduce yourself in your most confident and resonant voice and tell us what you will be singing."

I was standing on a stage in front of a few dozen people. It was exactly at this point that I realized what an epic mistake I had made when I signed up for singing class at family camp. My legs, whose previous employment had been to hold up the rest of my body, had turned in their letters of resignation. My heart, sensing the impending doom, was banging on my chest, begging to escape. My brain tried to maintain control over its subjects, pleading for them to get their acts together. I dug deep for my “most confident and resonant voice” but what I found was neither confident nor resonant. The best I could come up with was squeaky and shaky. “My name is Cari Noble, and I will be singing ‘Notice Me, Horton’ from Seussical the Musical.”

Then the accompanist played the first note on the piano, and I was beyond the point of no return. In a panic, I scanned the room for a friendly face and found a bright-eyed and sweet 12-year-old girl that reminded me of all of you. I locked my eyes on her, took a deep breath, and started to sing. “It’s taken all my courage to approach you, not to mention all my stamina to follow you across the hills and deserts.” She knew the song, so she mouthed the words along with me (which was incredibly lucky because my brain, realizing it was the captain of a mutinous ship, had finally surrendered). And then, before I knew it, it was over. I was done. People were clapping and smiling, and I felt like I had just climbed Mount Everest after winning the World Series and all the while discovering a way to reverse global warming. I’m pretty sure I jumped in the air while spinning in circles a few times on the stage. It was exhilarating! I had done it! I was just about to head back to the safety of my seat in the audience when … the teacher asked me to sing it again. (What? I had barely survived the first go-around!) And, again. (Really?!?) But what I noticed was that each time, it got a tiny bit easier. Each time my voice got a little bit more confident. It still wasn’t comfortable. My knees were still shaking and my heart was still racing, but I also didn’t die. I eventually got to sit down and bask in the glow of my accomplishment. Not the accomplishment of singing well because I’m pretty sure I didn’t do that, but the accomplishment of being brave, even for just a few minutes.